As synonymous with Aussie culture as Vegemite and Goon of Fortune, Cub is a company that is firmly entrenched in the landscape of local camper trailer manufacturing. They've been at it for years, are tuned in to what the people want, and have a reputation for campers that can stand up to the test of the rough roads. The Frontier at CTOTY had a few tweaks to it, so our judges were keen to see how the new model stacked up.

If there was ever a company who need no introduction it’d be Cub. It's been a mainstay in the industry since before there was an industry to be a mainstay of. This particular Cub camper is brand new. As in, it’s had a complete re-design since the time I saw it just a few weeks earlier, when it was also brand new. Cub's long had a reputation for rugged reliability and simplicity, but with so many competitors on the market they’ve decided it’s time to shake things up with something a little more exciting. Enter the forward fold Frontier. If you’re not familiar with the Frontier we’ve just finished dragging one of the first-generation Frontiers through hell and high water in Cape York to great success, so they’re tried and tested. The new Frontier still sports the same basic weight of 1200kg Tare, has the quickest set up time of any hard floor I’ve ever seen, and still has that proven rugged reliability. It’s also now wearing a slick new pair of shoes, deep gloss paint job and a fire red colour scheme that immediately sets it apart from the crowd. The base Frontier sports innovation throughout with unique solutions to problems, smart use of space, and stout Aussie manufacturing. Did the lack of options fitted hurt its chances against more specced-out competitors? The scores will tell! 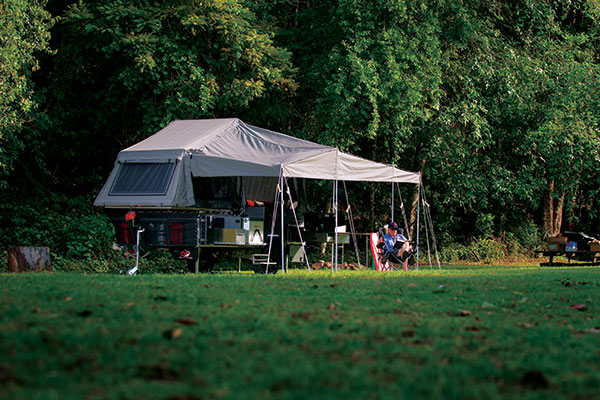 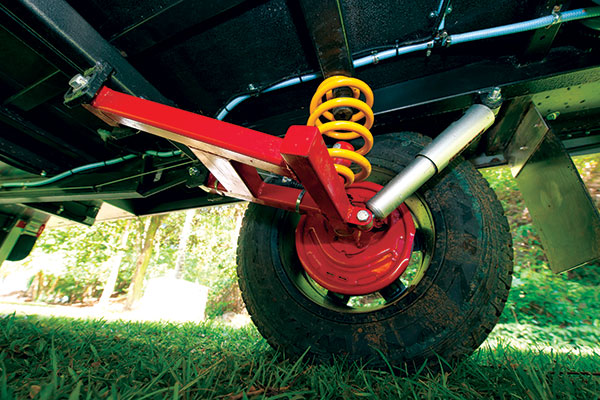 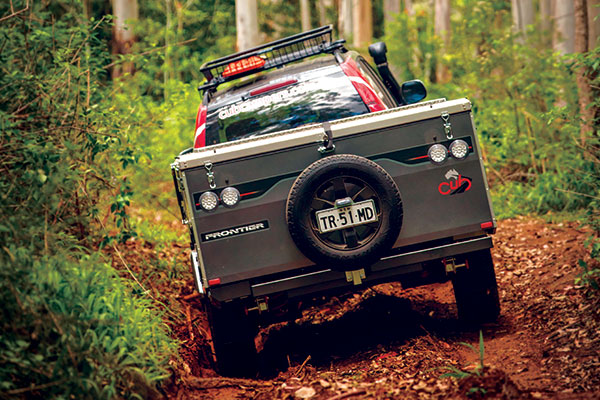 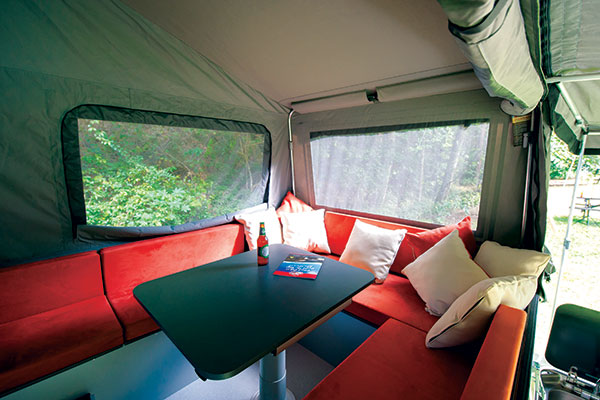 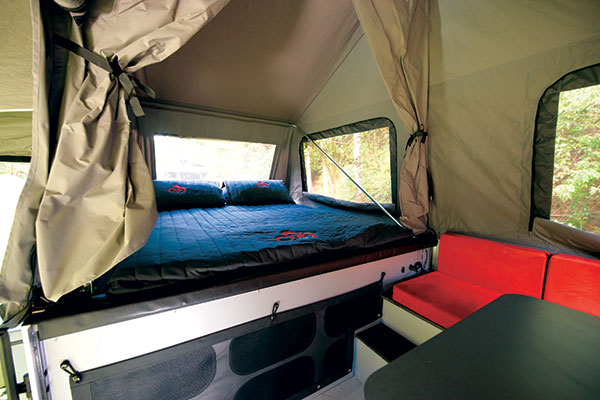 it was at Mt Warning and CTOTY. The camper, as it was presented, showed all the signs of moving on from the traditional Cub packaging. It had a 100L poly water tank – adequate without being great – mounted behind the axle and a single 100Ah AGM battery. With its 25A Projecta mains charger and 25A DC-DC charger it's well set up as a basic camper that would get you by.

However, if it had the optional second AGM battery (on its neat little slide-out drawer), with the optional solar panel it would cope much better in a remote situation, especially if it was equipped with a large capacity fridge.

The water would also be enhanced by the optional second water tank and the two jerry can holders would assist in boosting water capacity. There was plenty of gas capacity – with either two 4kg or two 9kg bottle holders.

There was so much good thought and planning that had been put into the Frontier that it deserved better marks here, but the judges have to score on what was presented. The kitchen was excellent, the living area roomy, the storage copious and easily accessed, the set-up and pack-up exceptionally easy. A little more time to fine tune this camper will help it a lot, and this should be on the list of everyone looking to buy a forward fold camper as it ticks a lot of boxes.

There’s no sugar coating it: when it comes to quality of construction, Cub has this category absolutely nailed. It’s the only brand building genuinely Aussie made campers at this price point, and it’s been doing it since the 1960s – a true industry veteran. So if build quality is your number one priority over gizmos and gadgets, this is the camper for you.

The Frontier’s body and chassis are built from Australian steel and are both backed by a five year warranty. It rides on Cub’s own independent suspension system with RockShox, the 16in all terrain tyres giving plenty of ground clearance. There’s an AL-KO offroad coupling up the front, as well as a steel stone guard protecting from rock spray. Cub has managed to get the Frontier down to an impressive 1200kg Tare, several hundred kilos lighter than most forward fold hard floors. That fact alone sets the Cub in good steed as a genuine offroader. Add to the mix an artillery of quality Aussie made offroad hardware and you’ve got a camper that won’t let you down in far flung corners of the country.

ANYTHING YOU WANT... YOU GOT IT

The Cub Frontier has the aesthetics and creature comforts to lure any would-be camper to undertake an extended journey. None of us can put up with exhausting set-up times at the end of a long day on the road and Cub have gone to great lengths to make assembly quick and easy. It’s a one person process that gets you camping in a jiffy with a very easy forward folding mechanism that has a combination of winch and gas strut assisted tent structure that pops into place.

The awning can remain attached when packed, drastically reducing assembly time each day and it is extended well past the camper's overall length to give an ideal outdoor living environment. Once it's set up, the large Queen size bed with its premium pocket spring mattress is complete with privacy screen. The convertible U-shaped lounge is a ripper with inviting upholstery and a convenient pop-up table.

Nothing beats the look and feel of quality Wax Converters canvas and this tent is a beaut. There’s plenty of windows for fresh air and that feeling of internal space plus the privacy and security of internal awnings, but none are external. Cub has included some nice post and structure fittings to make tent life simple.

Up front is a large pantry and fridge slide mounted side-by-side on high quality slides. At the rear is a beautiful stainless steel kitchen with three-burner Dometic stove with wind deflectors, pressurised sink, large drawers and a long table extension for preparation.

Check out all the action from CTOTY 2018 in issue #122 of Camper Trailer Australia magazine. Subscribe today for all the latest camper trailer news, reviews and travel inspiration.