If you really need a caravan but aren't ready to commit to wearing a beige cardigan, the AOR Quantum Plus might be what you're looking for. With a huge living space and capacity to sleep up to five it's as close as you'll get while still calling it a camper. Extensive openings throughout make the Quantum Plus an oasis in hot days thanks to significant air flow. This AOR might not snap necks on the tracks, but it'll provide a reliable and comfortable platform for serious back-country touring.

AOR prides itself on the high standards of design and construction in all its campers and it has rightly risen to the top echelon of camper manufacturers in Australia. Its Super Campers, epitomised by the Quantum Plus, head out the door at a steady rate because of those high standards. 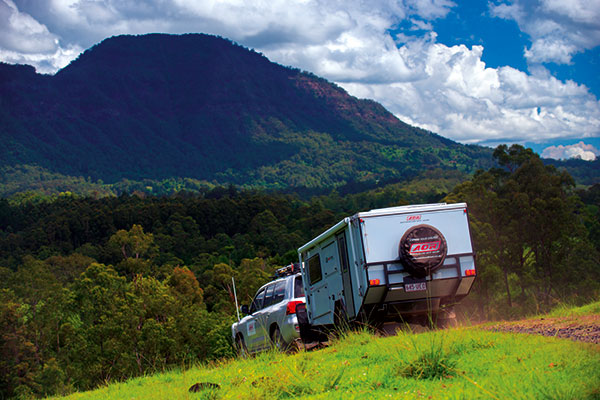 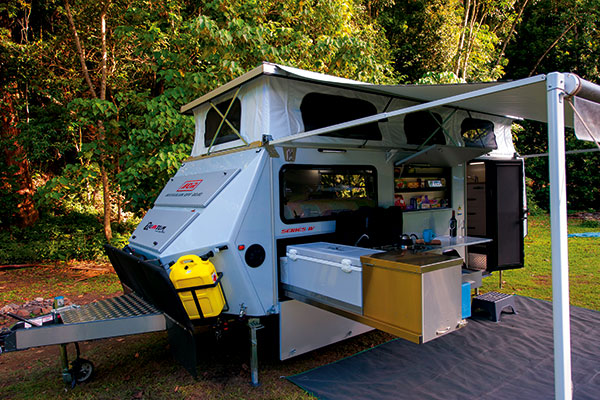 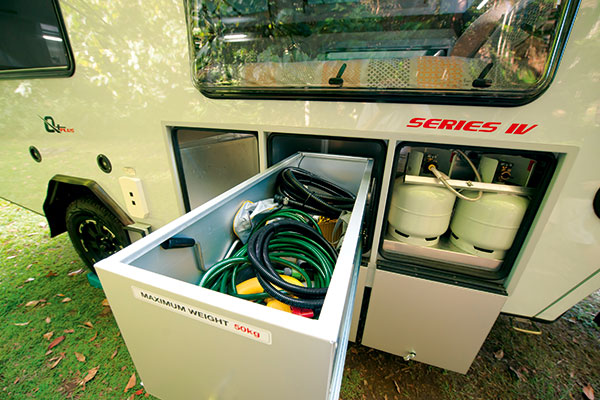 The Quantum Plus is built on a 150x50x3mm Duragal chassis that is continuous from the DO35 tow hitch to the taillights. Duragal construction means no galvanising over welds and cut edges, but it also means reduced costs from the expensive hot-dip galvanising process and the risks of distortion from the heating involved, as well as the risk of accumulating large quantities of zinc within a chassis and adding to the camper’s weight.

The body is built from fibreglass sheeting bonded into what AOR calls a “faceted design” for appearance and aerodynamic efficiency. Closed cell foam insulation all round ensures that the interior remains at a constant liveable temperature.

The Quantum Plus rides on a trailing arm dual shock independent suspension with 12in brakes and alloy rims. The sloped rear of the camper provides a good departure angle, though at 7000mm this was the longest camper at COTY and thus would have some restrictions in heavily timbered country or on tight tracks.

In some environments, the Quantum Plus would be greatly favoured, not just because of its 320L water capacity but also its grey and black water tanks, the latter with a macerator, which would make it very environmentally friendly. Combine that with the 240Ah of AGM batteries, 300W of roof-mounted solar and the Redarc Manager30 battery management system and you have a camper that not only can get just about anywhere but then has the legs to stay there for a long time.

Australian Off Road is a respected name in the Australian camper trailer market, having worked tirelessly over the years to earn its reputation for building exceptional quality offroad campers and hybrid caravans. And the Quantum Plus Super Camper we saw at CTOTY is no exception.

Coming in as one of the largest in the hybrid category at CTOTY, the Quantum Plus displayed an exceptional level of indoor and outdoor living functionality, not to mention luxury. The interior has a high-end caravan feel with a full internal bathroom that somehow still allows for a spacious aesthetic with loads of storage. As with any AOR product, outdoor living is prioritised on the Quantum Plus with a top quality and extremely functional external kitchen and plenty of space under the awning to seek refuge from the elements and watch the world go by.

All of this is built upon a rock solid, completely Australian-made trailer construction built for serious offroading. The water and electrical systems are not messing around either, with the Quantum Plus offering an incredible capacity for totally self-sufficient camping. This camper is going to most appeal to couples who want to explore remote and rugged Australia for extended periods of time in nothing less than total comfort.

EYE ON THE PRIZE

What defines a hybrid is debated so fiercely the country is almost to the point of spending a sneaky $100 mil to run a survey to figure it out, but one thing that’s always constant with a hybrid is they’re a juggling act. Where a camper trailer traditionally aims to be as small as possible, then expand out to your use, a hybrid tends to be the opposite. It starts out with the end goal in mind, then shrinks it enough to make it acceptable for the terrains you’re aiming on punting it through.

The Quantum Plus from AOR falls firmly at one end of the scale, and if it’s what you’re looking for it’s bound to be one of the most appealing options available. What it gives up (well, gains) in packed up footprint, it more than makes up for in liveability. It’s like towing your own private cabin throughout the remote reaches of Australia. The internal living space is light and breezy, with the large opening windows keeping it cool even as the summer heat was beating down on us. The full-sized queen bed is capped off with a pillow-top while there are options to spec it right up to a five-berther.

This model comes sporting a full internal ensuite including hot shower and toilet inside, while a second shower outside is perfect when hubby’s been kissing more fish than catching. One criticism was a lack of hanging space, so if you’re planning on turning up to camp in a freshly pressed blazer you might be in trouble.

Outside the Quantum Plus really shines. The awning is a caravan-style offering that is quick to setup and covers the cleverly designed kitchen to provide plenty of living space and ample food storage throughout the various nearby compartments.

So ya want to live forever? Well, you’ll certainly be self-sufficient enough to live for an indefinite period in remote adventures with the AOR Quantum. This well-equipped touring hybrid is virtually self-sustaining, at least for all of life’s power, water, cooking, storage and creature comforts – the hunting and gathering is up to you!

Water sustains life and the Quantum Plus provides a mammoth 280L of precious H2O in food-grade poly tanks that are completely protected with bash plates for added security. It can be opted with 220L fresh and 60L of grey water for topping up in more remote locations. The AOR provides total in-house hygiene with its full ensuite complete with a 110L black water storage tank and marine style macerator disposal system. There is also the added facility for another two 20L jerry cans on the nose cone which can add to the water supply should you have long-range facility in the towing vehicle.

When it comes to power you could virtually light up Luna Park. The fully integrated and loomed electrical circuit is a credit to the industry. It all starts with twin 120Ah AGM batteries with lithium options and a Redark Manager30 for clear indication and control of the state of charge and discharge rates. It manages the 240V and 12V power with 240 input as well as 30A charger and solar regulator for the Anderson plug input and two large 150W solar panels on the roof. There’s a huge 1000W pure sine wave inverter that will run everything including your essential morning coffee machine and some hair dryers!

The Quantum is stacked with 240V, USB and 12V outlets and there is a terrific array of sensible and energy efficient LED lighting throughout.

There is twin 4.5kg gas storage supplying the cooking facilities and a Truma hot water service for the ensuite, external shower and sink outlets. Add to this a Webasto diesel internal heater, Sirocco fan to keep the air moving and a premium sound system to soothe the explorer’s soul. All this is topped off with enough storage to supply the footy team with clothes and food for a month.

Check out all the action from CTOTY 2018 in issue #123 of Camper Trailer Australia magazine. Subscribe today for all the latest camper trailer news, reviews and travel inspiration.