The Bunya Mountains, 200km north-west of Brisbane, rise more than 1100m, to form an imposing mass of basalt ridges that dominate the surrounding plains.

Attracting some 200,000 visitors annually, the mountains are the remains of a shield volcano that produced numerous lava flows about 24 million years ago, part of wider volcanic activity that extended from the southern Main Range on the New South Wales border northwards to Kingaroy and beyond. 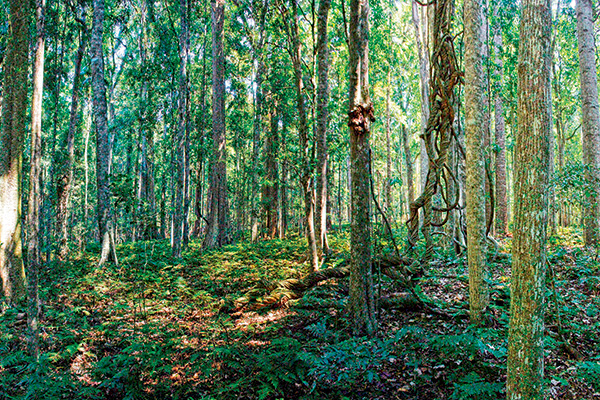 The eastern side of the mountains is accessed by several circuits that start from either Dandabah campground or the Paradise car park. The most popular of these is the 4km Scenic Circuit through fern-carpeted bunya forest and a variety of mountain scenery that includes a huge strangler fig, the Festoon and Tim Shea waterfalls and the Pine Gorge lookout with a panoramic view of South Burnett. Other tracks in this area explore spectacular rainforest with perennial streams and waterfalls, and eucalypt woodlands that ring with the call of local birds.

The Department of Transport and Main Roads urges caution due to the formidable steep and winding roads which, although accessible by conventional vehicles, are unsuitable for long and/or heavy vehicles.

When we visited, we were towing a hybrid offroad Kimberley Karavan of about 1.8t, which our trusty 80 Series LandCruiser had no difficulty hauling to the top – albeit slowly and steadily – and the rewards were well worth the extra fuel used to scale the peak.

However, if your big rig won’t make the climb, several nearby towns provide access to other parts of the mountains. If you’re coming from the west on the Bunya Highway, stop off at Bell, which has a general store, the Bellview Hotel, a tourist information centre, and the Bells and Whistles Caravan Park with a wide range of amenities. Maidenwell is about an hour’s drive east of the park, with fuel and supplies and free camping in a rest area behind the pub. The pretty town of Kumbia, 32km to the north, has a general store, mechanical services, a pub, and offers several accommodation options at Kumbia Caravan Park, Yamsion Rest Area, and Bushland Park Cabins and Camping.

When the Bunya Mountains NP was gazetted in 1908 it became the second national park in Queensland, protecting the world’s largest remaining forest of bunya pines. More than a park, this is a site of great spiritual significance to local Aboriginal people.

Primary custodianship of the mountains is shared by four local Aboriginal groups – the Wakka Wakka, the Jarowair, the Djaku-nde and the Barrungam – who hosted neighbouring tribes from across southern Queensland and northern New South Wales to triennial bonye bonye festivals. For all of them, the Bunya Mountain range is a deeply mystical place, where they came to renew their connection to country and revitalise their spiritual essence at Booburrgan Ngmmunge (‘the mother’s breast’).

These unique festivals were arguably the largest and most significant ceremonial gatherings of Aboriginal people in Queensland and quite possibly Australia. They were occasions for celebration and for feasting on the mountains’ abundant resources, for trade and the exchanging of gifts, for story, dancing and song; disputes were settled, alliances were affirmed, marriages arranged, and laws were discussed and developed in what has been described as a tribal parliament.

Central to these festive occasions was the remarkable bunya pine. The species once grew profusely in Queensland’s rainforests but is now restricted to small pockets in the state’s southeast and wet northern tropics. The Bunya is not a true pine but a member of the cone-bearing Araucariaceae family, which is also found in parts of Oceania and South America. The tree’s botanical name, Araucaria bidwillii, honours the botanist John Bidwill who sent specimens to Kew Gardens in London.

On 19 April 1842, then-Governor of New South Wales, George Gipps, aware of the tree’s importance to Aboriginal people and to lessen conflict between them and white loggers, proclaimed that Aboriginal people were to have sole use of bunya trees wherever they grew.

The Bunya Proclamation ceased in 1859 when Queensland officially separated from New South Wales. Thereafter, the expansion of European settlement across the Darling Downs and South Burnett brought logging and grazing to the mountains, and obstructed the triennial migration of large Aboriginal groups along traditional pathways. The time-honoured bonye bonye festivals became difficult to maintain and eventually ceased in 1875.

However, the sacred bunya pine was preserved and, in recent times, the spirit of the festival has been revived. A council of traditional elders and representatives from visiting Aboriginal groups hopes to reconvene the Bunya Festival every three years in a creative environment of visual arts and crafts, literature, music, dance and theatre.

Traditional custodians, and government agencies including the Queensland National Parks and Wildlife Service, are also exploring ways to co-manage the national park. One aspect of traditional culture that could prove particularly helpful is in the use of fire.

Before European settlement, local Aboriginal people used fire judiciously in and around the mountains to create firebreaks and promote new vegetation, especially grasslands, which attracted animals that were hunted for food. Cessation of traditional burning practices has resulted in the rapid colonisation of grasslands by woody plants and invasive weeds. It is estimated that as much as a quarter of the mountains’ unique grassy meadows (‘balds’) has been lost in this way, along with habitats for endangered wildlife that would not survive inside dense forests. Today, researchers and rangers are experimenting with Aboriginal fire practices to better manage the Bunya’s vulnerable grasslands and maintain species diversity.

Obviously, you’ll need to spend a few days in the park to cover all these attractions. Camping is available at the Dandabah camping area – a large open area with unpowered sites suitable for tents, caravans and camper trailers, with facilities that include picnic shelters, electric barbecues, flush toilets and showers. The Westcott and Burtons Well camping areas are suitable only for tenting, with toilets, picnic tables and wood barbecues. Alternative accommodation at B&Bs, cabins and guesthouses may also be found at the small village adjacent to the Dandabah ranger’s station, along with a restaurant, cafe, art and craft gallery, and a small general store.

When next you’re travelling through this part of Queensland, visit the magnificent Bunya Mountains and discover why, for thousands of years, Aboriginal people have revered it as a bountiful and uplifting place.

Check out the full feature in issue #109 of Camper Trailer Australia magazine. Subscribe today for all the latest camper trailer news, reviews and travel inspiration.