There are plenty of surprises to be found on this South-East Gippsland adventure!

The wind was blowing a gale, providing a challenge to pack up the swag and awning at the Marlo Ocean View Caravan and Camping Park. From here I continued along the road to Cape Conron and was nearly blown away as an angry ocean swell pounded the rocks. From here I chose the backroad scenic route to the Princes Highway via Cabbage Tree Creek, then headed to Orbost for some last-minute supplies. 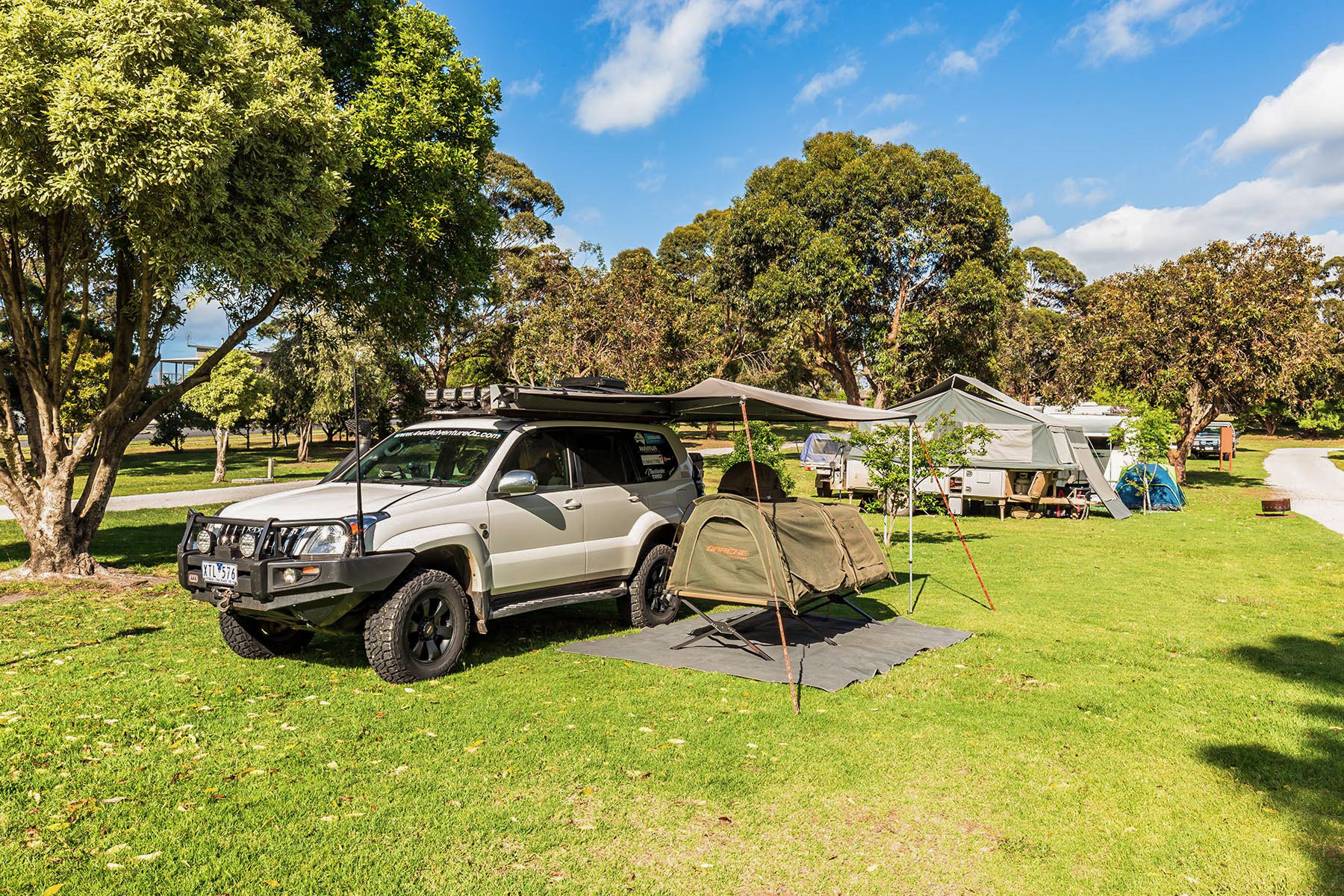 From Orbost, having followed the signs onto the Snowy River Country Trail, I suggest you wind your window down and enjoyed the smells and sounds of this native forest. Ironbark and Redwood tower above and the cicadas sing joyfully. Tree ferns show where the creeks are and birds will flap hurriedly in front of you; magpies, kookaburras and the occasional Yellow-Tailed Black Cockatoo.

There are many blind turns and even though the road is signposted 80kmh, it’s rare to find a spot capable of reaching that speed. Tune your UHF to channel 40 as this is logging country and you will cross paths with these behemoths on your journey. The bitumen turns to gravel briefly, until you reach Bonang, but once past that tiny hamlet, it’s dirt again and the track gets narrower. If you come across a log truck, don’t be shy to jump on the UHF, say g’day and ask if more trucks are coming, you don’t want to meet on one of the many tight turns. Following the Deddick River from Bonang along the McKillops Road, take time to check out the Ambyne Suspension Bridge. Designed and built by the Victorian Country Roads Board (CRB), it was in service from 1935 to 1970, when it was closed to traffic. After falling into disrepair, restoration works were carried out in 1999 and 2004. The historical and scientific significance is due to its uniqueness as a CRB vehicular suspension bridge.

Mount Deddick overlooks where the township of Deddick once stood, but there is little to see these days. Not much further on and you will reach McKillops Bridge. George McKillops used this site as a stock crossing from 1835 as he moved his cattle from the Monaro district of New South Wales to Lake Omeo in Victoria. A turnback ferry was later used before the bridge construction between 1931-36. The height was raised after the original bridge was washed away in the record floods of 1934. McKillops Bridge was once claimed to be the longest arc-welded steel truss road bridge in the world and is now classified by the National Trust as a structure of ‘Cultural Heritage Significance’. Allow a good four hours to reach McKillops Bridge from Orbost, it’s also a great place for experienced adventurers to launch canoes and explore the gorges downstream. There are also several walking trails, including the Silver Mine Walking Trail.

The nearby campground is basic with drop toilets, picnic tables and fireplaces (although fuel stoves are preferred). There is little in the way of flat spots, but at least the sites are well dispersed. Do take care when camping under the trees, a large limb fell metres away from my Prado on my last visit. The drive out from the campground side is precarious yet jaw-dropping as you climb up the mountain. The views of the Snowy River down in the valley are spectacular, yet there are few places to stop and take it all in. Some sections of this track are thin, and it can be hairy if you meet another vehicle coming from the opposite direction. There are two great spots to check out though: Little River Gorge and Little River Falls. A short drive off McKillops Road leads to a car park before a short walk down to the viewing platform atop Little River Gorge. The gorge has been carved out over millions of years by the Little River and is 4km long and 500 metres deep, making it Victoria’s deepest gorge. If you’re lucky, during wet conditions, you may witness Wulgulmerang Creek plunging 300 metres to the valley floor from the chasm opposite the lookout. Not far from the gorge turnoff is the carpark and picnic area at Little River Falls. Don’t be fooled by the small falls here, cross the bridge and follow the walking trail down to the main falls where you’ll see the water cascading 31 metres down the rockface.

On the final stretch, once across the cattle grid, you’re no longer in the Snowy River National Park, and you’ll meander through beautiful cattle country before reaching the T-Junction. From here you have two choices on which way to turn to begin another adventure. Turning right will lead you to Jindabyne via the Barry Way or turning left will take you to the hidden wonders at Buchan. Where once a shallow sea covered the lands, the geology of Buchan is predominantly limestone that formed almost 400 million years ago. When the earth’s crust was thrust high above sea level the limestone caves were formed. The formations that you will find within the Buchan Caves are between 1 and 10 million years old. The Buchan Caves Reserve is jointly managed by Parks Victoria and members of the Gunaikurnai nation, who are the traditional owners that used Buchan as a significant meeting point when they travelled from the sea to the mountains. It’s great to see traditional owners getting more involved in running our parks and teaching us more about their culture.

The caves were first discovered in 1907 when Frank Moon found a small hole emitting a cool breeze while searching for caves on behalf of the Victorian Government. Having used some dynamite to blast a larger hole, he descended into the darkness using a rope, he was alone. Frank was gobsmacked by what he found, the most amazing wonders of the Fairy Cave.

Frederick Wilson, an experienced cave manager, was lured from the Jenolan Caves in NSW and he immediately installed paths, ladders, protective fencing and handrails into the Fairy Cave, the same ones you see today. The first tourists were invited to explore the Buchan Caves in 1917. The only way to explore the caves is on a guided tour through the Royal and Fairy Caves and these are conducted daily. You can purchase tickets directly from the Visitors Centre; however, it’s recommended that you pre-purchase tickets online so that you won’t be left disappointed. The tours can get very busy, especially on long weekends and during school holidays. You can choose to tour a single cave or the one I recommend is a double cave tour as each cave is different and the double tour provides the best Buchan experience.

A trip to Buchan isn’t complete without stopping in at the Buchan Caves Hotel. The first pub was built in the 1800s and began trading as the “Buchan Inn” in 1882. Tragically, on 8th April 2014, the hotel was destroyed by fire and the owners didn’t have the funds to rebuild. Being such an important hub in the community, locals launched the “Let’s Build A Pub” crowdfunding campaign, raising $605,146. The new Buchan Caves Hotel was completed in 2016 and the community has its hub back. Pop in, have a cold one and check out what the generosity of so many people has created. Getting there: The Snowy River Country Trail is a 290km loop trail that starts and ends at Orbost.

When to go: The warmer months are the best times to visit as it can get wet and cold in winter which just adds to the fun.

What to take: You will need to be self-reliant and include fuel, firewood, food and water, plus take out what you take in. Fuel is available in Orbost and Buchan.