Towering sandstone spires stand sentry, daring us far off the beaten track into the Territory’s last untamed wild lands. From Borroloola to the mighty Roper River and protected by an inaccessible coastline and corrugations too deep for most, this remote offroad paradise is one of the last of its kind.

Journeys into Limmen National Park and neighbouring Lorella Springs Wilderness Park are never undertaken lightly. In this land that graders forgot, the late dry season corrugations are almost unbearable, and there are few creature comforts. But an easy ride would seem like cheating when you’ve come to escape it all and stoke a crackling campfire on the edge of some mighty emerald river.

Still, every time we rattle off the Savannah Way on this off-track run to the Roper River, the unrelenting corrugations give our Landcruiser a solid hammering. So it’s with some trepidation that we put our bearings on the line and brave the track to Lorella Springs — 140km of deeply puckered dirt north of Cape Crawford. 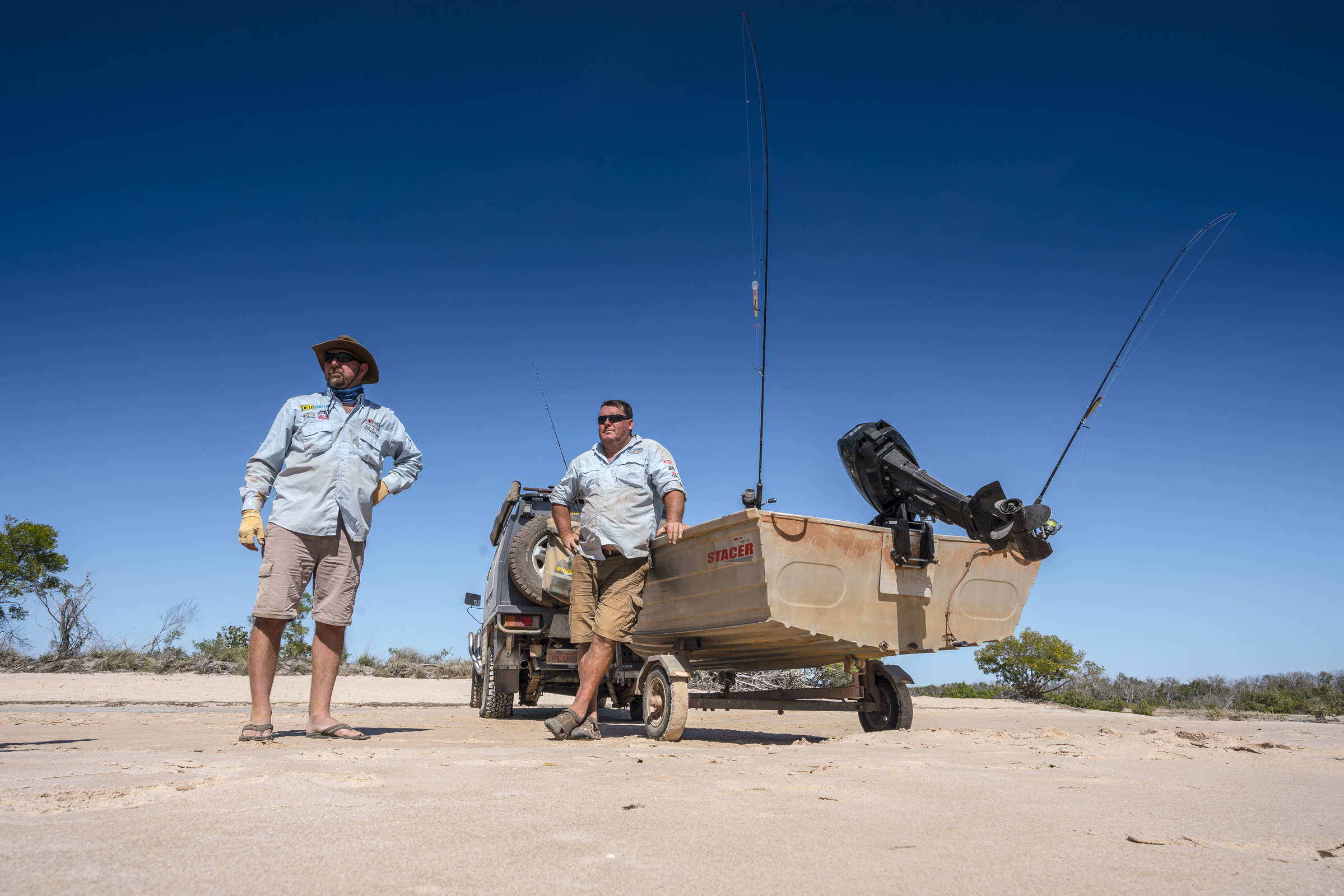 Often overshadowed by the great Limmen National Park, this pastoral property on Limmen’s southern boundary is where 49 year-old Rhett Walker works cattle, ushers tourists, and dreams of restoring his piece of paradise into a sanctuary that might one day rival Limmen itself.

Lorella Springs rates as the largest, family-run, coastal pastoral property in the country, and some nights when the roads dry out and the winter skies clear, visitor numbers swell to 500. Suffice to say that Lorella Springs pulls a crowd, and its quirky owner Rhett is something of a survivor in these parts.

His parents Peter and Nance bought neighbouring Nathan River Station — now the headquarters of Limmen National Park — when Rhett was 14 years old. Mum and Dad had split up by then so 14 year-old Rhett dropped out of school and moved up from Sydney to mend fences and muster. But the cattle couldn’t be caught, a voracious cyclone took out the fences, and within two years the bank came knocking and Rhett’s family lost it all.

Penniless, his mother Nance moved Rhett and his six young siblings into the scrub with only a tarp to keep off the wet season deluges, and nothing to eat but what they killed themselves. As Rhett remembers, sometimes they went for days without eating. They’d set nets each night to trap crocodile and, when they got lucky, they’d cook their catch over a campfire. They had no medicine, no car, and no lifeline when things went horribly wrong, which they often did.

“It was very hard,” says Rhett. “For five months we lived entirely off the land, hunting crocodiles and goannas through the pouring rain.”

His father eventually did a deal and they got Lorella Springs in 1986. And while the endless childhood dramas should have put him off the land for good, Rhett battled on when the rest of his family split, patching fences and slowly building what is today one of the north’s most popular tourism retreats.

A TASTE OF WILD

With rare coastal access to the Gulf of Carpentaria and soothing hot springs to soak in over the chilly winter months, Lorella Springs offers a slice of civilisation in the wilderness. There’s a camping ground with hot water donkey showers, a bar and restaurant, and even a mechanic on site if the corrugations get the better of your vehicle.

All this comes at a price though. While an entire campground of rigs proves that not everyone minds, some will baulk at paying $20 per person, per night, especially if you bush camp far from the shower block. Kids pay their age, but for a family at least, it all adds up after a couple of nights, and you’ll need a few because there is a lot to see.

We arrive at the tail end of the dry season, when waterfalls have long since dried up and the roads are rough, but enough rock pools and hot springs linger for us to soak off the dust. Without a tinny in tow, we don’t make the most of the good river fishing, but instead, spend a night at Nanny’s Retreat, an hour’s drive from the homestead.

Following the creek upstream past rock shelters and honey-scented fern leaf grevilleas, we reach a cool pool and a skinny crevice between rock walls that’s just wide enough to swim through. At sunset we have it all to ourselves, and after chilling out in the pools, we climb boulders towering above for grander views. There’s a starry night and a marshmallow campfire, and nothing but the howl of dingoes to interrupt the serenity.

At sunrise we make a break for the sea, turning down Rosie’s Track to reach the Gulf of Carpentaria and wander on the sand. The tide is out so we put up the drone for big picture views, and chat to a couple of East Coast anglers, a long way from home. They lament, as anglers do, about the lack of fish they’ve caught and the horror of having to head home without some tall fishing tales in the bag.

They launch their boat for one last round and we wish them well. You don’t travel this far into the tropics to eat campfire stew.

Lorella’s visitor map highlights a baffling number of things to see: Scary Thing Swamp and the Valley of the Mazes, Teardrop Falls and Musterers Cave. Snapping Handbag Billabong sounds like a top place to battle barra, or we could climb Walkers Rock — a mini Ayers Rock — that Rhett recommends for the treasures we’ll discover within.

After a long day of exploring (most of it in low-range 4WD), we paddle a canoe along Rosie Rapids and have the pandanus-fringed Nudie Hot Springs all to ourselves. It’s not as scorching as I’d like, but we linger anyway, floating with fish that nibble our toes. Lorella Springs has access to those towering sandstone Lost City formations that make Limmen National Park famous, but the midday heat doesn’t tempt us onto the trail and those springs are rather too delicious to leave.

We visit Limmen’s Southern Lost City at dawn the next day, just in time to see the sun turn a dramatic cluster of sandstone pillars rosy. These immense pillars are chiseled into the ancient Arnhem Land Plateau in dramatic domes and bulging buttresses.

The Southern Lost City is easy to access and there’s a top little bush camp at its base. A rugged 4WD trip away, you can also find the wilder Nathan (Western) Lost City with its Indigenous rock art and views over the O’Keefe Valley.

What Limmen National Park lacks — the hot springs and lofty rock pools — it more than makes up for with great emerald rivers and lily-covered lagoons, and sensational waterfront camping on the mighty Roper River. Limmen’s angling, bushwalking and birding is unrivalled, so arrive with a boat in tow and boots on board and get set to explore. Bathe beneath Butterfly Falls, wander through the Lost Cities and wherever there’s water, spot crocs, stoke a campfire and reel in a barramundi dinner.

Butterfly Falls is as chilly as it is beautiful: a croc-free, shady oasis named for the thousands of common crow butterflies that rise in fluttering clouds from the amphitheatre’s cool, stone walls. Camp here or push on to Towns River to park your camper on its high set limestone bank, shake out the camp chairs and cast a line. You can launch a tinny at Towns and boat downstream chasing barramundi, watching the black kites that swoop overhead.

You really can’t leave Limmen without spending time on the Roper River. Its translucent, emerald flow winds for more than 1,000km between Arnhem Land and the Limmen Bight. There are crocs and lots of barramundi and top riverside camping too, the best offering being Munbililla Campground with its boat ramp, hot showers and bargain priced sites at just $6.60 a night ($15.40/family).

As we leave Lorella Springs to explore it all, Rhett Walker tells me he’s a lucky guy. It’s not that six years ago he cheated death after a wayward grader tyre, that he was pulling behind his tractor, snapped and took off the top of his head. Rhett recovered, although after the accident his vision for Lorella shifted. Today, he says, he’s no longer thrilled about Lorella’s burgeoning visitor numbers.

“Originally, I prostituted Lorella to try and get it going,” he admits, but no more. Now he wants to attract travellers coming for nature, not to ride their quad bikes. His plans to rejuvenate the land into a true wilderness sanctuary have him busily planting trees and building permanent water sources to sustain native wildlife through the dry.

He’s releasing juvenile emus, restoring the wetlands and wants to do away with fishing altogether. Come 2020, pets and red claw trapping will no longer be allowed, and that’s just the start. As incongruous as it might seem, Rhett is also keen to build up the station’s cattle numbers, a burning ambition no doubt fuelled by a history of pastoral disappointments.

“There’s always something to do,” he admits. “35 years of ideas are waiting to come out and now I’m making them happen.”

Whatever plans he makes, it will all be done with wife Marie and boys Indiana, Tristan and Alaska by his side.

“I’m very lucky,” Rhett admits. “I have some pretty stupid ideas, but they support me.”

Limmen National Park is located 200km south-east of Mataranka via the Roper Highway and 76km north-west of Borroloola. Lorella Springs lies on the southern edge of Limmen, 140km off the bitumen north of Cape Crawford.

Expect rough, corrugated roads and high water crossings just after the wet season. Creeks evaporate and tracks worsen as the dry season wears on. Check conditions before setting out at roadreport.nt.gov.au. For an access code to visit the Western Lost City phone or visit the Limmen Ranger Station (08 8975 9940).

Arrive early in the dry season (April or May) to see Lorella Springs’ waterfalls in flow and to paddle the creeks. Wet season rains can close Limmen National Park anytime from November to May.

Freshwater and estuarine crocodiles inhabit waterways across this region so restrict your swims to Limmen’s Butterfly Falls, and the hot springs and lofty waterholes at Lorella Springs.